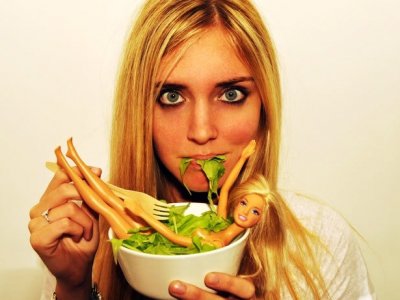 1. You Can’t Indulge, Even a Little

A lot of women are under the mistaken impression that “dieting” is synonymous with “deprivation.” It’s not true. But if you can’t indulge, even a little, in the foods you love more than sunshine, it’s a sign you’re obsessed with dieting.

I know, I know, I’ve been there. You’re in line at Subway behind someone who needs to lose at least 50 pounds, who can barely breathe after the grueling walk to the counter, and what do they order with their foot-long meatball marinara sub? A Diet Coke. It can be difficult NOT to judge that person in a thought bubble (not out loud). If you find yourself judging everyone though, for their less-than-healthy choices, then it’s another sign you are obsessed with dieting, and not in a good way.

3. You Weigh in Every Day

I can’t recall the last time I stood on a scale, but I do have friends who weigh themselves every day, with the devotion to the device that rivals religious mania. While it’s not necessarily a bad thing to weigh in each morning, it’s not the best idea; scales aren’t the best way to tell if your diet is working, anyway, since the fat you’re losing weighs more than the lean muscle you’re gaining. But if you find yourself agonizing over every ounce you gain or lose, it’s another sign you are obsessed with dieting.

4. You Count Every Calorie, Always

When you first started dieting, you counted every calorie because you had to, in order to help you form new, healthy habits. But now that you know a glass of milk contains about 120 calories, you don’t have to measure every cup, and count every calorie. It’s okay to estimate, and to use plates, bowl, and cups you know are approximately one serving.

5. You Lose Sleep over It

Who hasn’t lain awake at night, feeling guilty over a decision they made earlier in the day? And who hasn’t felt that insomnia-inducing guilt over, say, one piece of cheesecake too many? But if you’re losing sleep over every minor diet mis-step, it’s another sign you’re obsessed with dieting.

6. Your Workout is Too Intense

Only once in my life have I ever worked out so hard I threw up, and I will never do that again. My personal trainer and doctor have both been clear — it’s okay to work yourself hard, but not to the point of physical punishment.

7. You Purge, or Starve Yourself

There’s being health-conscious, there’s being diet-obsessed, and over a very thin line, there’s the terrible realm of eating disorders. If you ever purge after eating, or skip eating altogether to lose weight, you’ve moved beyond an obsession with dieting, and into an eating disorder. It’s unhealthy, and dangerous. It can literally kill you… please get help, and right away!

Truly, if you answered “yes” to two or more of these signs, especially that last one, of course, you really might be in dangerous dieting water. Please, sweetie, get help! Talk to your doctor, a friend, a stranger… get help now! If you’ve ever been obsessed with dieting, how did you know it was time to get help? Is there anything you would add to my list?